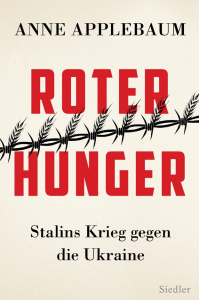 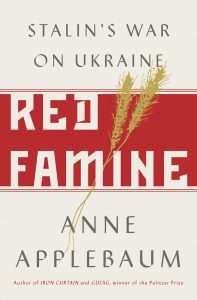 In 1929 Stalin launched his policy of agricultural collectivization—in effect a second Russian revolution—which forced millions of peasants off their land and onto collective farms. The result was a catastrophic famine, the most lethal in European history. At least five million people died between 1931 and 1933 in the USSR. But instead of sending relief the Soviet state made use of the catastrophe to rid itself of a political problem. In Red Famine, Anne Applebaum argues that more than three million of those dead were Ukrainians who perished not because they were accidental victims of a bad policy but because the state deliberately set out to kill them.

Applebaum proves what has long been suspected: after a series of rebellions unsettled the province, Stalin set out to destroy the Ukrainian peasantry. The state sealed the republic’s borders and seized all available food. Starvation set in rapidly, and people ate anything: grass, tree bark, dogs, corpses. In some cases, they killed one another for food. Devastating and definitive, Red Famine captures the horror of ordinary people struggling to survive extraordinary evil.

Today, Russia, the successor to the Soviet Union, has placed Ukrainian independence in its sights once more. Applebaum’s compulsively readable narrative recalls one of the worst crimes of the twentieth century, and shows how it may foreshadow a new threat to the political order in the twenty-first. 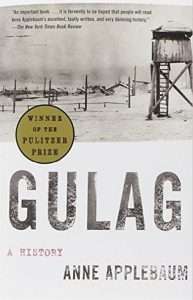 GULAG: A History is a narrative account of the origins and development of the Soviet concentration camps, from Lenin to Gorbachev. Based on archives, interviews, new research and recently published memoirs, the book explains the role that the camps played in the Soviet political and economic system. It also describes daily life in the camps: how people lived, worked, ate, slept, fought, died and survived.

GULAG: A History won the 2004 Pulitzer Prize for non-Fiction, as well as Britain’s Duff-Cooper Prize. The books was a finalist for the National Book Award, the National Book Critics Circle Award, the LA Times Book Award and the Samuel Johnson Prize. It has appeared or is due to appear in more than two dozen translations, including all major East and West European languages.
END_OF_DOCUMENT_TOKEN_TO_BE_REPLACED

From Anne Applebaum’s Introduction:
“The writers in this volume have one thing in common: All of them were arrested for political crimes in the Soviet Union, and all of them spent years – sometimes many years – in the concentration camp system now known as the Gulag. There, however, their similarities end.”

Certainly their backgrounds were very different. Some of them, such as the literary historian Dmitri Likhachev and the ethnographer Nina Gagen-Torn, were scions of the wealthiest and best-educated families of pre-revolutionary St. Petersburg. Others, among them Lev Razgon, were ambitious young members of the Bolshevik elite. Still others, including Hava Volovich and Elena Glinka, came from very ordinary, provincial famlies. Gustav Herling was a professional writer before his arrest; Isaak Filshtinsky a historian and scholar; Anatolii Zhigulin a poet. Kazimierz Zarod, by contrast, was a civil servant whose only book was his camp memoir.

Once inside the camps, their experiences were very different too. They held many different kinds of camp jobs, at differing times working in forestry, mining, factories and camp administration. One had a baby; another was a victim of a mass rape. One was a “norm-setter,” a person who decided what norms other prisoners would have to fulfill. Another spent time in a sharashka, a special prison for scientists, with a laboratory attached. They all played different roles in the hierarchy and the culture of the camps, had different relationships with the professional criminals and with the “jailers” and guards who watched over them. Some were shored up by their faith in God, others by close friendships. Others kept sane by writing poetry or singing popular songs.

The wide variety of people and voices found in this book is not accidental, for the Gulag itself was an extraordinarily varied place. The word GULAG is an acronym: Literally, it means “Main Camp Administration. Over time, however, the “Gulag” has also come mean not just the camp administration, but the entire Soviet slave labor complex: labour camps, punishment camps, criminal and political camps, women’s camps, children’s camps, transit camps, exile villages, Moscow prisons, rural prisons, railway cars. The authors in this book all survived at least one of these penal institutions, and sometimes several.

Most of these essays were written by people who were imprisoned in the Gulag during Stalin’s reign, for those were the years when the camp population was largest, the Gulag’s political role was most significant, and its contribution to the Soviet economy was greatest. Indeed, between 1929, when they first became a mass phenomenon, and 1953, the year of Stalin’s death, some 18 million passed through them. In addition, a further 6 or 7 million people were deported, not to camps but to exile villages. In total, that means the number of people with some experience of imprisonment, in Stalin’s Soviet Union, could have run as high as 25 million, about 15% of the population.

Nevertheless there were also earlier camps, set up by Lenin and Dzerzhinsky in the 1920s, as an ad hoc, emergency measure to contain “enemies of the people”: Dimitri Likhachev survived one of these. There were also later camps, in existence from the time of Stalin’s death until the end of the Soviet Union in 1991. Some of these, such as the one in which Anatolii Marchenko was imprisoned, became notorious for treating political prisoners with even more cruelty than those of an earlier era.

The camps had an extraordinary geographical breadth as well. The Gulag’s most famous camps were in Siberia and the far North, where prisoners worked in mines and cut timber. But the Gulag also ran camps in central Moscow, where prisoners built apartment blocks or designed airplanes; camps in Krasnoyarsk where prisoners ran nuclear power plants; fishing camps on the Pacific coast. The Gulag photo albums in the Russian State Archive conatin pictures of prisoners with their camels, prisoners in the desert, prisoners hoeing vegetables or shucking corn. From Aktyubinsk to Yakutsk, there is hardly a single major population center in the former Soviet Union that did not have its own local camp or camps, and nor a single industry that did not employ prisoners. Hence the central purpose of this anthology: To provide the interested reader with a sampling of the wide range of experiences possible in the gulag, from transport ships to informers, from pregnancy to forestry…” 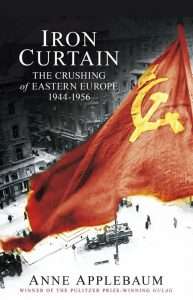 At the end of the Second World War, the Soviet Union unexpectedly found itself in control of a huge swathe of territory in Eastern Europe. Stalin and his secret police set out to convert a dozen radically different countries to a completely new political and moral system: communism. Iron Curtain describes how the Communist regimes of Eastern Europe were created and what daily life was like once they were complete. The book describes how political parties, the church, the media, young people’s organizations – the institutions of civil society on every level – were eviscerated, how the secret police services were organized, how ethnic cleansing was carried out – and how some people were forced to collaborate while others managed to resist.

“So much effort is spent trying to understand democratization these days, and so little is spent trying to understand the opposite processes. Anne Applebaum corrects that imbalance, explaining how and why societies succumb to totalitarian rule. Iron Curtain is a deeply researched and eloquent description of events which took place not long ago and in places not far away – events which contain many lessons for the present.”
– Fareed Zakaria, author of The Post-American World

“Iron Curtain is an exceptionally important book which effectively challenges many of the myths of the origins of the Cold War. It is wise, perceptive, remarkably objective and brilliantly researched.”
– Antony Beevor, author of Stalingrad and The Second World War

“This dramatic book gives us, for the first time, the testimony of dozens of men and women who found themselves in the middle of one of the most traumatic periods of European history. Anne Applebaum conveys the impact of politics and ideology on individual lives with extraordinary immediacy.”
– Amanda Foreman, author of Georgiana: Duchess of Devonshire

“Anne Applebaum’s highly readable book is distinguished by its ability to describe and evoke the personal, human experience of Sovietisation in vivid detail, based on extensive original research and interviews with those who remember.”
– Timothy Garton Ash, author of The Magic Lantern: The Revolution of ’89 Witnessed in Warsaw, Budapest, Berlin, and Prague 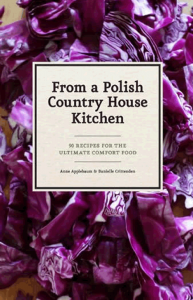 With more than 150 splendid photographs, and more than 90 recipes for classic and contemporary Polish food, this unique cookbook brings an ignored cuisine to light. Anne Applebaum has lived in Poland since before the fall of communism, and this cookbook—nourished by her engagement with the culture and food of her adopted country—offers a tantalizing look into the turbulent history of this beautiful region. She and her co-author, Danielle Crittenden, celebrate long-distance friendships with a love of food at the core, bringing the cuisine of Anne’s Polish country home into kitchens the world over. 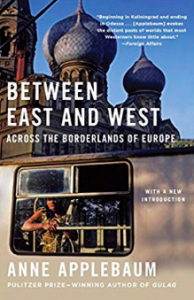 Published in 1995, Between East and West: Across the Borderlands of Europe is an account of a journey from the Baltic to the Black Sea, across Lithuania, Belarus and Ukraine, made in 1991, just as the Soviet Union was about to break apart. Its main subject is the shifting national identities of the region’s inhabitants – the effects of a century’s worth of shifting borders.

Between East and West, Introduction, PDF-Document